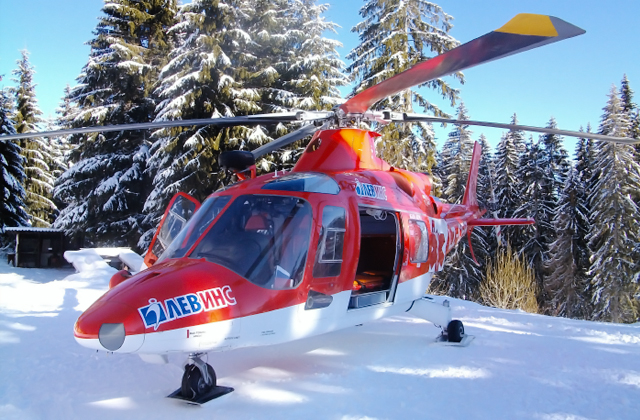 The “Active Care” project started in June 2014 as a public-private partnership between Bulgarian Red Cross and the Club “Active Security” organization and is financially supported by „LEV INS” AD INSURANCE COMPANY.

The “Active Care” project was developed in order to support the state activities in the area of first premedical and medical aid through medical teams based on an European model as well as to provide wider possibilities for access to first medical aid for more people at the entire country’s territory, to safeguard maximum number of accidents with the necessary and adequate post-accident assistance and to upgrade the already existing possibilities. „Active Care“ provides air and ground transport assistance through helicopters, network of ambulance vehicles with country wide coverage and drivers, trained by the BRC to provide first aid.

Тhe medical helicopter of “Lev Ins” was involved in the response to many heavy accidents. Its participation was critical for saving the lives of the injured.

In continuation of the “Active care” project, the company developed an insurance product with the same name. The due premium amounts to BGN 6 and provides ground and/or air transport assistance.

LEV INS AD INSURANCE COMPANY is the first in Bulgaria to invest forces and resources in the training of air and ground rescue teams, as well as the pioneer in the introduction and approval of air assistance in Bulgaria.

During the past year, trainings and demonstrations of employees of the Mountain Rescue Service / MRS / were held in the major Bulgarian winter resorts - Bansko, Pamporovo, Panichishte, Vitosha. The purpose of these trainings is more and more MSS employees to get acquainted with the possibilities of air rescue and to synchronize their actions with the pilots of the Active Care helicopter. 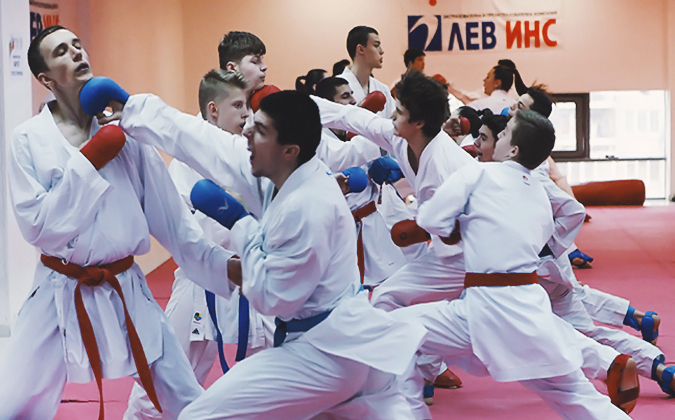 In 2007 the city of Varna hosted the World Karate Championship. LEV INS AD INSURANCE COMPANY pitched in BGN 150 000 to help with the organization of the event.

Returning the favor, the Bulgarian athletes won a whole heap of medals. The World Karate Championship that was held in the Palace of Sports and Culture in Bulgaria s Seaside Capital, the city of Varna, was a roaring success. Over 500 competitors from as many as 26 countries fought on the tatami in the various styles and weight divisions, from 8-year-olds to experienced veterans. The Association of Automobile Importers in conjunction with LEV INS AD INSURANCE COMPANY and the Traffic Police launched a nationwide campaign entitled Save the Child to raise awareness and bring down the number of children dying in traffic accidents. Special road signs were installed at and around 67 schools, and 27 kindergartens in Sofia, Plovdiv, Varna, and Bourgas to improve safety -. 27 schools and 2 kindergartens are in Sofia, 16 schools in Plovdiv, 11 in Varna, and 11 still in Bourgas. Apart from improving safety around schools, the campaign attempted to raise awareness by distributing visual materials in the public transportation system, in car dealerships members of the Association of Automobile Importers, and in the offices of LEV INS AD INSURANCE COMPANY throughout the country. The funding required to fuel the project till 2010 (500 000 Bulgarian Leva) will be donated from the Prevention Fund of LEV INS AD INSURANCE COMPANY. The project will benefit schools and kindergartens located in traffic hotspots throughout the country. For ZK Lev Ins AD supporting sport is a corporate policy, an expression of the company’s social responsibility, and a way to provide active care to children, young people, and all Bulgarian citizens basically. ZK Lev Ins AD has been the main sponsor of the Bulgarian National Karate Federation since 2006.

Karate is one of the most popular mass sports. It is a challenge for the human spirit and the will and strength of the human body. It is both audacity and respect for the opponent, a time-honored wisdom learnt along the Way. Karate speaks all languages and connects all people and generations irrespective of race, sex, or religion.

As a result of ZK Lev Ins AD’s partnership with the Bulgarian National Karate Federation we are seeing the birth of new star athletes and well-adjusted citizens of Bulgaria. Now they are European and World Champions but in 2015 we hope they are going to become Olympic Champions at the First European Olympic Games held in 2015 in Baku where karate is scheduled to make its debut as an Olympic sport.

ZK Lev Ins AD became the general sponsor of PFC Levski in a very difficult period for the team. The reasons for this partnership are sentimental and go all the way back to the time the insurance company was established. Lev Ins has helped many sports clubs in the past and the emphasis has always been on developing children and young athletes.

The partnership between ZK Lev Ins AD and PFC Levski is no exception. We have paid special attention to the development of the club’s children’s and youth’s teams in the hope that one day some of these young athletes may find a place on the first team.

Unlike the usual practice with this type of partnerships, ZK Lev Ins AD introduced a new incentive model based on achieving excellent results. 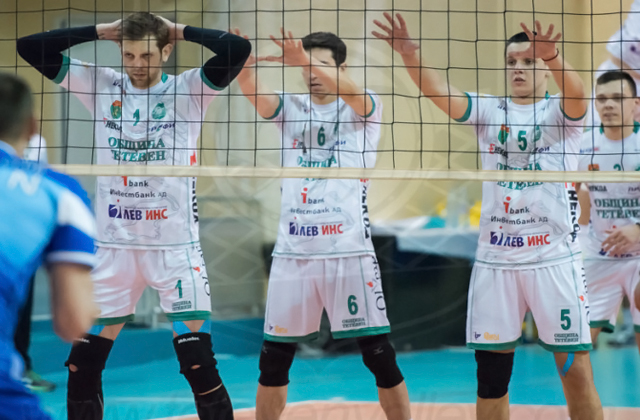 Supported by LEV INS AD INSURANCE COMPANY, the men's volleyball team Teteven Volley celebrated a great sporting year. With a series of victories, the boys assured a place among the eight best teams in Bulgaria as well as participation in the playoffs of the so-called Super League. In the midst of the pandemic in 2020, together with the Life Insurance Institute, Lev Ins provided the following grants for the needs of the Ministry of Foreign Affairs:

- 5,000 helmets (sanitary and hygienic face shield with protective plaque CPS-19, which serves as a barrier against airborne spread of viruses),

- Free special coverage for events caused by an infection with Covid-19. The special coverage will be included completely free of charge in the Group "Risk Life Insurance" for all employees of the Ministry of Interior. The sport wonders of Bulgaria

LEV INS AD INSURANCE COMPANY stood behind the campaign of the Standard newspaper - "The Sport Wonders of Bulgaria" in favor of the young athletes of the country. Thanks to the campaign, 100 of the best young talents were awarded. The shareholders, management and employees of „LEV INS” AD INSURANCE COMPANY expressed their solidarity with the families of the victims of the disasters in Central and Northeast Bulgaria in June 2014. The company sent emergency assistance teams in the most affected areas in order to provide help to the victims and to mitigate the damages. The company proceeded with advance payment of insurance compensation immediately after the flood and opened telephone hotline for reporting of endangered people and damages.
The „LEV INS” AD INSURANCE COMPANY declared immediately its readiness to react with the medical helicopter in case of need. The company sent the air ambulance in order to assist in the search of a missing family after the Devin flood. 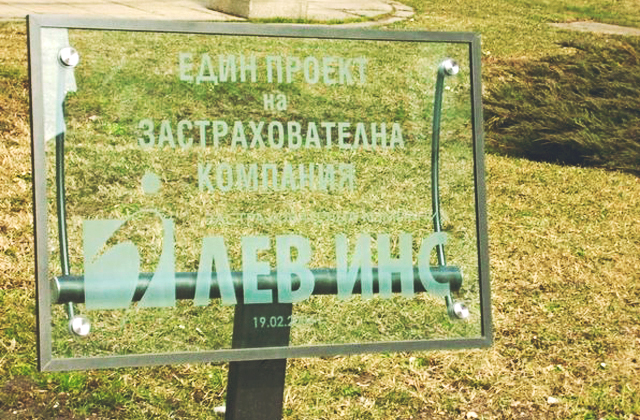 The monuments of Vassil Levski in the Capital City and in his hometown, Karlovo, were fitted with artistic illumination with the financial assistance of LEV INS AD to commemorate the 133rd anniversary of his death. To celebrate the 33rd anniversary of Familia Toniaka and the 10th anniversary of its incorporation, LEV INS AD INSURANCE COMPANY sponsored their nationwide tour. People from 30 cities in Bulgaria were given the opportunity to listen to their favorite songs live in the town squares. LEV INS AD INSURANCE COMPANY supported the initiative of Standart newspaper, which donated its readers with the Notebook of Vasil Levski. A photocopy of the Deacon's personal notebook was issued on the occasion of the 143rd anniversary of his hanging. Lev Ins provided sanitary insoles to 133 schools across the country or, according to official figures, nearly 20,000 students. On the occasion of the beginning of the 2020/2021 school year, the company, in partnership with the manufacturer Tarpaulin Products and HMI Veliko Tarnovo, joined the national campaign of the Bulgarian Red Cross "We lend a hand for safe return to school." The initiative provided a clean and safe environment for the youngest students, their teachers and educators.